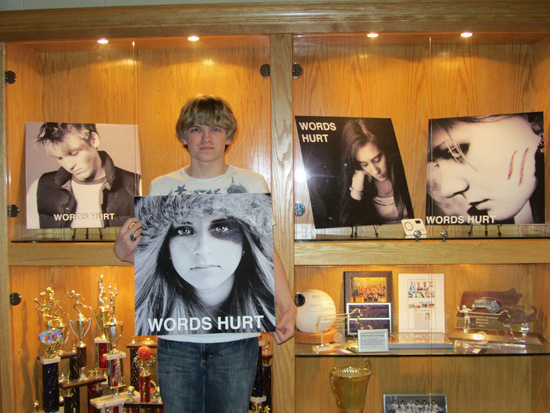 Kevin Farrell, a Valley Tech junior from Bellingham, displays his anti-bullying ad campaign that was unveiled
on January 25, which was recently declared “No Name Calling Day” by Governor Deval Patrick.

UPTON — As part of the state’s initiative to cut down bullying in public schools, Governor Deval Patrick recently declared January 25 “No Name Calling Day” in Massachusetts. Blackstone Valley Tech celebrated the day by unveiling a student designed ad campaign to inspire support of anti-bullying in the school. The student behind that initiative is Graphic Communications junior Kevin Farrell from Bellingham.

Kevin was inspired to promote positive change with a call to action against bullying and used his creativity and learned skill set to do so. His inspiration came in the saddest of forms; a news story reporting the death of a New York high school student who took his own life after a prolonged period of harassment. Kevin applied his creativity to the anti-bullying cause and began diligently working on an ad campaign in his Multimedia Communications class to have an impact on his school community.

Kevin created multiple design concepts, which were reviewed by his teachers and student peers. He then prepared and delivered a professional presentation to school administrators. So moving was Kevin’s work that the administration team agreed to display the campaign in a trophy case in the school’s Hall of Fame, temporarily removing medals and trophies to make room for the week-long showcase. The school recognized “No Name Calling Day” by unveiling Kevin’s work, but the campaign will remain in the current location to close out the week. It will then be repositioned, in a more prominent home on a much grander scale in the school’s cafeteria. “All of the students in class were drawn to Kevin’s work because it is so poignant,” stated Graphic Communications Team Leader Adele Ellis. “The growth of technology means that bullying now takes place in an anonymous format, and spreads quickly. Kevin’s work is a call to action, and a learning lesson for all of our students. They are learning that their creativity and their voice can have an impact.”

Kevin is very involved in his school community, and also in his hometown of Bellingham. He recently presented his Eagle Scout leadership service project proposal to the Bellingham Public School District School Committee. His proposed project includes transforming the courtyard at the Bellingham Middle School into an outdoor classroom.

About the Education Foundation

The mission of the Blackstone Valley Chamber of Commerce is to promote the economic vitality of the Blackstone Valley and meet the needs of the Chamber’s business members, while providing leadership on issues which impact the economy and quality of life in the Valley. The Blackstone Valley Chamber of Commerce serves the eleven towns in the Massachusetts BV Region: Blackstone, Douglas, Grafton, Hopedale, Mendon, Millbury, Millville, Northbridge, Sutton, Upton and Uxbridge. For more information on the Chamber please contact administrator@blackstonevalley.org or call 508 234 9090 X101.